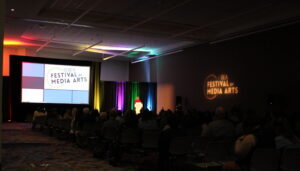 After two years of announcing award winners virtually and sending trophies to recipients in the mail, the BEA’s Festival of Media Arts laid out the red carpet for this year’s winners to get their moments in the spotlight. The event took place on Monday, April 2

5th. Each recipient received a $1,000 cash prize made possible by the Diana King Memorial Endowment.

Dominick Acierno, a recent graduate of the University of Maryland, College Park, won a Best of Festival Award for his piece titled “Community Growth.” He said it is an incredible honor to be rewarded for his work.

“Kind of surprised that I am here, but I am very honored,” Acierno said. “The video was done pretty last minute at the end of the semester. Because of COVID and all the restrictions that we had in place, we were unable to film as much as we would’ve liked to. But I’m really happy with how the team was able to help me out a lot and we were able to get this project done. I’m really happy with the way that it turned out.”

Acierno said that he was able to attend several sessions while in Las Vegas at the conference, and he is excited to be able to apply what he’s learned to his current job.

“Lessons that I can take from some of the creative courses I sat in on, editing and color grading which is something I’m wanting to better in my work,” Acierno said.

Vic Costello, outgoing president of the BEA and associate professor at Elon University, said that winning a Best of Festival Award is like a mini-Oscar for people who do creative work.

“You’re being recognized literally, the 19 recipients represented the top 1% of those 1500 entries that came into the festival,” Costello said. “So, it’s very difficult to achieve Best of Festival status within this organization. It’s the cream of the crop.” 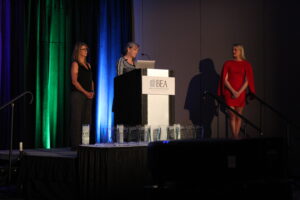 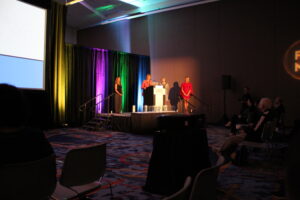 Becky Beamer, an associate professor at OSMOLET University in Norway, won the “Festival Chairs Award” for faculty members and said that the process to submit her documentary for an award was a long time in the making.

“For me, this was about six years in the making,” Beamer said. “I knew right away that I wanted to submit for an award because I love the BEA family and how they support the peers and other people working and teaching in the creative media arts.”

Beamer said that the best advice she could to anyone thinking about shooting a documentary is to begin right away.

“Stop talking about it, start doing it and make it happen,” Beamer said.

Adam Chilcote, a current Missouri State University student, won the “Faculty Chair’s Award” for student entries and said that he is blown away by the honor.

“I didn’t know what to expect, I thought that one of the other projects would win for sure,” Chilcote said. “Then they said Escape and my jaw dropped. I did not think I would get the best of the best, that’s pretty rare.”

Chilcote said that the best advice he can give for any future entries into the competition is to block out the noise and focus on your project.

“Do the best that you can no matter what anyone is saying or if you don’t think that your work is very good,” Chilcote said. “If you enjoy doing it, do it and do it to the best of your ability and you never know what can happen. I mean, I never expected to be here, but I am.”

Kim Fox, a professor from The American University in Cairo, received a total of three awards from the festival. Two of those being from the “Faculty Audio” and “Faculty News” competitions.

This article was contributed by Jacob Hall, Canaan Sims, and Abigail Clark.